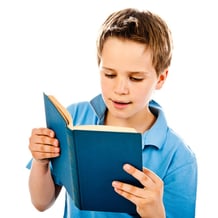 Listen to Elaine tell the story in her own words:

She explains, “ By the end of year 2, it was becoming a much greater issue. He was able to do comprehension tasks where he could find direct answers and direct links, but as soon as there was anything to do with inferring meaning from text, he was really struggling, and struggling also with maths concepts. He started saying, ‘I don't want to go to school’. He was getting anxiety pains, and he really wasn't enjoying himself. It was a year 3 teacher who finally said, ‘Look, there's just something that's not right’.”

But Elaine was unable to find the right help for Elliot in Year 3 and so she went searching for a solution. Her search lasted 18 months and included:

When she read “The Brain That Changes Itself", by Dr Norman Doidge, she discovered the Fast ForWord program.

So she got Elliot started on the Fast ForWord brain training and now after 4 months she reports major improvements in his:

As Elliot describes it, things are lot easier to learn, and when his teachers give him new information, he doesn't have to work as hard to keep what he has been told.

What is Auditory Processing Disorder?

The Neuroscience of Learning & Fast ForWord by Dr Martha Burns

"Just Try Harder" Will Not Fix Your Child's Learning Difficulties