How Can I tell if my child has Auditory Processing Disorder? 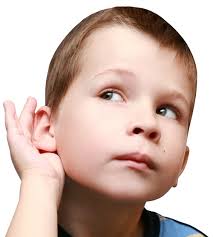 Are there signs you can look out for at home, that could indicate your child has auditory processing disorder (APD)?

To find out, LearnFast asked Devon Barnes, speech pathologist and APD specialist, and we recorded her answers on video.

Devon Barnes: Well, I know a lot of parents complain that their children don't listen or that they ignore them. For a child with APD, it really could be that they, in essence, don't hear what the parent says. Or it's not that they don't hear, they don't process the instruction as they should. So then they don't respond in an appropriate way.

Interviewer: I guess it would be very easy for a parent to say, "My child doesn't listen to me". So again, similar to the classroom situation, maybe we need to give them a break and allow a longer time for them to respond?

Devon Barnes: Yes. If the parent is aware that the child has an auditory processing disorder, then that's a very good strategy. But many parents will just complain that their child doesn't listen or doesn't respond, not being aware that the child actually has a problem. That can end up in a distressing situation for both the child and the parent because the parent might be reprimanding the child when, in fact, the child is doing the best that they can.

Interviewer: Do you find that sometimes children do unpredictable things because perhaps they only heard half the instruction?

Interviewer: So it might actually be really difficult to diagnose the problem or think that there's a problem because you're too busy just getting frustrated about the fact that the child done something irregular or unpredictable.

Interviewer: Do we find some of the symptoms are the same as in the classroom, like background noise in the home?

Devon Barnes: Yes, that very much can be a problem. We know these days lots of families have their television on all day.

Interviewer: Yeah. I was going to mention that. Is the television in the background a problem?

Devon Barnes: Yes, it is, particularly for a child with this disorder because if mum is asking them to go to their room and do something specific, or collect something from their room and the television is on, they're not going to be able to process what the mother, or the parent has asked them to do.

Interviewer: I know in one of our earlier discussions, you mentioned that children sometimes cover their ears when they're being shouted at. Is that actually causing them discomfort? Does it cause them pain or is it just a frustration reaction?

Devon Barnes: I think it's not so much a physical symptom. It's more a psychological symptom because the sound really bothers them. It's really hard to tell in a young child if it does cause pain, but it's more that it just distresses them. It's just irritating to the child and so they want to block out that background noise.

Interviewer: I guess perhaps another source for the irregular behaviour if that was the case?

Devon Barnes: Yes. Yes. It would be a red flag to a parent if a child is constantly putting their hands over their ears. Something's not right and they need to seek some professional advice about that.

Interviewer: How would a parent know whether it was an auditory processing problem or a hearing acuity problem? Would they have any idea as to whether it was which one?

Devon Barnes: I don't think so. That's why it's really important. Number one is to get the hearing checked before we do anything else. Particularly for a child that's had a history of multiple ear infections and because we know that when the brain needs to be processing speech and hearing speech clearly to develop the auditory pathways, recurrent ear infections interrupt that process.

If a child has a history of recurrent ear infections, that child is more likely to have an auditory processing disorder.

Interviewer: When we think about all these symptoms combined, does that also sometimes lead to memory loss? Do children just forget what to do? Do they just listen to so much and think, "Oh I don't understand it. I'm just not going to do it" and then just forget?

Devon Barnes: That happens at home, a lot. I think that switching off behaviour, very similar to the classroom, that the capacity for the brain to hold on to what a child hears is very much reduced when you have trouble processing what you hear.

Interviewer: Let's say that you didn't think that your child had any sort of auditory problem at all, yet they didn't like going to school or they were hesitant about going to school, could that be a signal that something is not right?

Devon Barnes: Exactly. So then a parent really needs to take action and try  and . . . You know they might even start off with their GP. If the child is starting to become reluctant to go to school, well we know they're not happy at school and whatever is causing that distress needs to be investigated.

Could Auditory Processing Disorder be the Reason Your Child is Struggling to Read?
What is APD?