Can you imagine what it would be like to suddenly forget your past, to have pounding headaches, dizziness and tremors?

To be unable to find words when you wanted to speak? 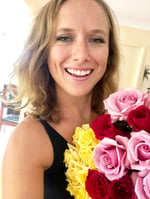 To experience an extreme loss of energy, have your blood pressure drop dangerously low, and find yourself uncomfortably sensitive to sounds and sunlight?

And to feel that as well as having no past, you have no future?

Sarah Rasborsek did.  She experienced all that and more when she "fried her brain" and suffered chronic brain inflammation during a triathlon on Queensland's Gold Coast in January 2018.

Since then Sarah has been rebuilding her brain, using multiple therapies including cognitive training described by Dr Norman Doidge in his book, "The Brain That Changes Itself".

Sarah told me her story - it's one of tragedy and suffering but it's also inspirational and hopeful at the same time.

Listen to  our discussion on the Learning Capacity Podcast

If you would like to read the complete podcast transcript, here it is:

Episode 93 of The Learning Capacity Podcast

"Life was good, I was living the dream"

Suddenly the world changed for Sarah

That must have been the beginning of what was happening to me.

It does some damage while it's up there, and swells.

A blog to practice writing, spelling and grammar

Exhausted at the end of each day

"I had lost all sense of who I was"

Don't know where you've been or where you're going

The Brain That Changes Itself by Dr Norman Doidge

Feeling the brain connections happening - a buzz of energy

A cognitive coach helps when the going gets tough

Is that what Monique's been doing for you, I understand?