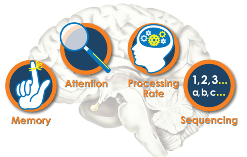 Thanks to the astounding developments in brain science over the past few decades, we now understand much better how we develop our language and learn to read.

In this video, Devon Barnes, speech pathologist and literacy specialist, discusses the brain science of language, learning and reading. She also explains how neuroscience programs, in particular Fast ForWord, can help develop the thinking and language skills vital for our students success at school.

• Reading is a language skill
• Parents who reinforce baby babble help them develop language
• Thinking skills (memory, attention, processing speed and the ability to sequence) plus language skills are the foundations for reading & learning
• Fast ForWord can enhance the learning capacity of all students

Interviewer: In this video we'll explain how Fast ForWord's proven ability to help students with a range of learning and reading challenges is built on brain science research. Clinical Director, Devon Barnes discusses the research and talks about the link between student's language skills and their learning and reading abilities.

Interviewer: So Devon, thanks for joining us. You've been in the field of brain science and learning for a long time now. Can you fill us in there just briefly?

Devon Barnes: Well, I've been a Speech Language Pathologist now for 43 years. I'm also a trained audiologist. I don't currently work in that field. And for the last 20 years I've specialized in trying to understand why some children have difficulty learning oral language and reading.

Interviewer: If I understand this correctly, there was a time when we could only study the brain when it was not alive anymore; I don't want to use the dead word although I just did, but now we can study the living brain.

Interviewer: And that has opened up a whole new way of looking at the brain. Is that the right way to think about it?

Devon Barnes: And in understanding behavior and difficulties. Neuroscience also has given us the principles by which we can restructure brains.

Interviewer: Yeah, that's a very interesting topic, I believe the word is plasticity.

Devon Barnes: I think the most important lessons we've learned over the least last few years is that brains can change. We used to think that there was a critical period for brains to develop and after that period that was it. You had the brain capacity, maybe at 10 or 12, and you were stuck with it for the rest of your life. Well, we absolutely know that that's not true.

Interviewer: So is it a case where we now see a clear difference between what you might call a normal brain and a struggling brain?

Interviewer: Is it a case where you could actually say that things are literally lighting up in the brain? Do scans allow us to see it that way?

Interviewer: So that's not slang or colloquialism.

Interviewer: Things are actually lighting up.

Devon Barnes: When we scan a brain with functional magnetic residence imaging, we give the student a task. So it could be a reading task, it could be a writing task. We give them some kind of task that we know is a crucial task for reading. And then we look at the brain so they're injected with a certain little chemical that then picks up the energy the brain actually uses.

Interviewer: It sounds to me like it's all about making connections. The concept of listening, language, and reading has been a critical set of connections. It is one that's often spoken about. Can you tell me why that's important?

Devon Barnes: Sure. One of the most important messages I like to get across is that reading is a language skill.

Interviewer: Even though it's not oral as such.

Devon Barnes: But even when you read silently, what are doing in your head? Saying the words, talking to yourself.

Interviewer: Yes, I guess you're talking to yourself, aren't you?

Devon Barnes: Now, for children to learn language, first and foremost they must be able to hear. So if you're born with a hearing loss, you won't learn language easily.

So what happens in the child's brain? Every child is born with the capacity to speak any language. And they will learn the language that they're immersed in, the mother tongue. So, in a child with fine hearing, their brain then gets fine tuned to the sounds in the mother tongue.

The baby is capable of making any sound that occurs in any language. So when the baby is developing language it coos, and goos, and babbles. If it's making a click, we ignore that because it doesn't mean anything, but if you're a Kalahari bushman that click could mean tiger.

Devon Barnes: And so you will reinforce that click because in that language that click has meaning. If there are babies living in an English speaking environment, they coo and goo, and as I said make all sorts of sounds. And one day they'll go dad, dad, dad. Now the baby is just babbling. They don't know that that means anything, but we do.

Devon Barnes: And we get excited, so we reinforce that babble and we give it meaning.

Interviewer: And that then begins the process of making connections.

Devon Barnes: Absolutely, and of learning oral language and later on reading.

Interviewer: And we treat them neuroplastically, I suppose.

Devon Barnes: Exactly. We now have an intervention that's kind of out of science to remediate the problem. That intervention is called Fast ForWord and it's come out of 30 years of neuroscience research.

Interviewer: Historically, we would normally think of treating psychological or neurological problems with drugs or some sort of physical intervention. What you're suggesting here is that we can actually train our brains to change and reorganize using principles that we've learned from the research.

Interviewer: This must open up a whole new range of options.

Interviewer: And Fast ForWord is one of those.

Devon Barnes: Absolutely. Now, what neuroscience has shown us is not only the kinds of exercises that the brain needs to rewire these areas of the brain that aren't functioning correctly or aren't functioning ultimately. We also have to make sure that our program is adaptive. So if it's the child is doing a program, the program itself has to adapt to each child's skill level. Make it a bit harder if it's too easy. Drop it back if it's too hard.

And our principle for neuroscience that's built into the Fast ForWord program is that we have to simultaneously develop skills critical to learning and those skills will be cognitive skills of attention, memory, process, and sequencing.

But because we're working on oral and written language it also has to develop language skills, phonological skills. Fine tune that auditory system so that the child has that precise map of sounds. Work on all aspects of language, grammar and vocabulary, and comprehension, so these programs have all of those components built in, so they'll simultaneously develop cognitive and language skills.

Interviewer: I suppose people are going to want to know who is really going to benefit from this product.

Devon Barnes: Basically, we could say all children, but really in the beginning the program was designed for children with language and reading impairment. And for most schools that's the group that they tackled, but we are finding now that the program is also being used for children without difficulty to enhance their learning to strengthen their brains as well.

Also for children on the autism spectrum it's becoming clear to us that it's very a powerful tool for improving their language. And not only does it improve their language skills, but we also find that they get a bit of it in their social skill development as well.

It's also really beneficial for children who are learning English as a second language.

Interviewer: Do we know the results yet?

Devon Barnes: We have an enormous amount of results. There are over 250 studies that I could share with you, the results of Fast ForWord.

Some of the results, some of the studies have actually been using brain imaging. There was a study done by Temple and others at Stanford University where they took two groups of children with and without reading impairment. They scanned their brains and also gave them a series of reading tasks. Then the struggling readers were given Fast ForWord and then they again scanned their brains, and gave them reading tasks.

Not only did we see a huge change in those critical areas of the brain needed for reading, so those areas that did not light up before the program now lit up.

There are many, many studies being done in schools, but mainly in the United States. We have some data from Australia showing the very positive changes in school districts improvement in reading on their national tests like the Naplan in schools that have implemented the Fast ForWord program.

Interviewer: Devon Barnes it sounds like a very exciting field.

Devon Barnes: It is and I'm very privileged to do what I do, so thank you very much.

Interviewer: Thank you so much. Thank you for sharing with us.