Why Your Working Memory is Important for Your General Intelligence

"Working memory is vitally important for learning. But it is important to remember that memory and attention aren't subclinical skills, they are actually part of what we call executive function. They are part of what matures as you get older that enables you to be effective and goal oriented. They are the part of what makes a student an effective student, a successful student.", said Dr Martha Burns in a recent presentation.

Here is a summary of what she said in her presentation.

'Working memory is your RAM as I say. It's closely related to general intelligence. Research done in 2008 is now a hallmark study at the University in Bern, Switzerland by Susanne Jaeggi who's a friend of mine, where she just took typical adults like you and I and all she did was a working memory test with them for 19 days in a row.

If you do a working memory test, 19 days in a row you get better at it. It's like a concentration game only hers is much harder and much more boring. I tried to do it and I couldn't.

But not only did those adults who did the work, typical adults, in Bern, Switzerland, at the University of Bern. But when she tested what's called general intelligence, their ability to solve problems that they've never seen before, those who went through the working memory exercises as opposed to a controlled group who just did video games, showed a significant increase in their problem solving ability.

To comprehend a sentence that you've read, to know the vocabulary word that you didn't know before and remember it, that requires working memory.

Reading comprehension requires working memory. It's been embedded by the neuroscientists in every single exercise in these programs. 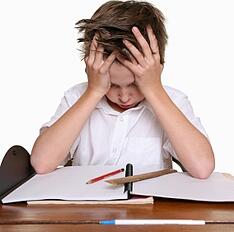 What do working memory problems look like in the classroom? Well, often, the biggest sign is the student knows the material but gets terrible scores on tests because they keep rereading the question over and over again.

That's why when we look at secondary level students who do Fast ForWord, we can get sometimes four and five year gains on standardized reading tests. Why? Because they knew how to read, they couldn't take the test fast enough. We improve their working memory so that they could show you what they'd learned.

And you know what, they are going to have a terrible problem with Chinese and Japanese. I can't imagine what that must be like to memorize all those ideographs.