What's involved in becoming a volunteer scripture teacher at your local primary school?

There are differences depending on which country or state you are in, and which religion you wish to teach.

But many of the challenges will be similar regardless of jurisdiction or religion. Challenges like how to teach a class of students with a wide age range - from 6 to 12 years, how to answer "difficult questions" in a way that satisfies each child, and how much focus to put on the wider cultural aspects of a religion.

Sydney lawyer, Kaushik Murali, spoke to me on The Learning Capacity Podcast about his experience as a volunteer Hindu scripture teacher

Listen to the interview

If you would like to read the complete podcast transcript, here it is:

Episode 100 of The Learning Capacity Podcast

Peter Barnes:               Kaushik, the reason we're chatting today is that you've been volunteering to teach the Hinduism scripture class at a local primary school.  How did this happen?

Kaushik Murali:            Well, my firstborn daughter, she's a six year old and she's in year one at this primary school. And as you know, I'm Indian and, I guess, Hindu by birth. And I'm married to an Australian woman. And so we're a half-half household. And one of the things I think my wife wanted was to make sure my kids know enough about the Indian side, given that we live in Australia now and it's, I guess, harder to access compared to when we were in India.

So one of the ways we thought we would do that is by attending Hinduism scripture classes in her school. And I volunteered because these scripture classes are obviously done by volunteer teachers, generally parent teachers. And I think the last one we had was in and out. She wasn't very reliable. So we thought we should kind of have an overhaul, I guess, of the teaching staff for Hinduism. And now there are two of us.

I'm only a part-timer. I'm not a part-timer, I'm more the substitute teacher in case the other Hindu teacher can't make it. And it's only happened once so far, and so I stepped in.

But then as you get older and travel the world and meet more people, and you suddenly realize that we all have possibly the same values, we just come at it from different ways. And then, obviously, the religious fervour that sits behind those values, I guess, tends to go away. So we're not, no, we're not religious by any stretch.

But I think I understand enough about my religion. I know the stories, I know the lessons it's trying to pass. Which was possibly the main reason why I volunteered to do this in the first place, because I know enough about my culture, which I think I can pass on to the next generation. Or so I thought.

Kaushik:                       There is a basic course which is driven by what's called the Vishva Hindu Parishad, which is the Hindu body, I guess, which also has a presence in Australia. And I think they have some links with the Department of Education, and so they are the approved providers of Hinduism, if you will.

Vishva Hindu Parishad is the gatekeeper for Hindu scripture 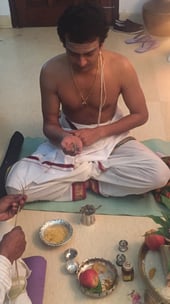 And they're very moderate, so you don't find dogmatic stances on Hinduism come in through that body. But, yeah, so Vishva Hindu Parishad is the gatekeeper for Hindu scripture in at least New South Wales.

Peter:    Someone once told me that Hinduism is not so much, in India, so much a religion alone, but more a series of rituals. And in a cultural sense. Is that a fair assessment or a fair summary of the situation? And if it is, how are you approaching these classes? From a religious angle or from a ritual angle, or from a cultural angle? Or just stories? Tell us the approach.

Kaushik:    That's a good question. At least the way Indians commonly tout Hinduism is it's not a religion, it is a way of life. At least that's the catch-cry  I've heard growing up.  But  I think any religion could say that. Because what I guess it has done is, given how long religions have been around and the generations of people that have gone through that particular way of life, it comes down to a sum total of your rituals and practices. All your beliefs and your values are embodied in these rituals and these practices.

When you say ritual, I guess it gives it a bit of a pagan feel probably, or something a bit more, I don't know, cultish probably even. And Hinduism certainly has its share of that. As you, yourself, know with your association with India, there's definitely some rites and rituals and practices that we go through which are pretty old world and probably some might say irrelevant at this point.

Teaching a class with ages from 6 to 11

Kaushik:                       That's certainly a challenge and sometimes that's, as a teacher, I think I question how effective these classroom settings are where you get such a vast range of age difference between students. And as you know, Peter, talking to a six year old and then a seven year old requires a different tack compared to speaking to a 10 year old or 11 year old.

Their insight into the statements you make are very different from what a 10 year old or 11 year old does. So that is something I've certainly found challenging because, yeah, you feel you're not being authentic.

Kaushik:                       Look, that's a good question, and I've certainly found it challenging in my class. In growing up when we used to ask questions that challenged, say, the authenticity of a story, a religious story. Generally you were just asked to shut up and not question things beyond a certain measure.

Because obviously, as I've realized now, my parents and the elders in our community themselves didn't have the answers. And I'm sure we've all experienced it in different ways where kids ask you some pretty curly questions which don't have straightforward answers.

Kaushik:                       Correct. So as it is, when you're trying to tackle these hard balls from kids, I think it becomes even harder, like you said, when that age range is so different. And you only have half an hour to get your point across in a particular class.

And so that, I find, is definitely a challenge. But, yeah, my message to parents who either put their kids in scripture class or want to teach kids scripture, volunteer to be scripture teachers for different religions, get ready to tackle some hard questions. Because we don't live in an era where you can just ask kids to shut up and not question anymore.

And I think the biggest takeaway is when you're trying to defend a particular religion, it gets quite hard because obviously there is you have to have that leap of faith up to a point. And kids cotton onto that very quickly.

So I don't know if I'm necessarily answering your question, but the point I want you to take away is it's probably going to be even harder for kids who attend scripture classes to almost follow that religion going forward because of the challenges within the system of trying to answer curly questions to such a vast age group. Not necessarily finding the conviction yourself to be able to do it.

Peter:                           Interesting, Kaushik. So actually we don't want to get into this area of the value of these scripture classes, but just to reflect that dipping a child into a religious education for 30 minutes a week, probably on its own, they need the religion in their whole life, at home, everywhere else, to really make an impact, I imagine.