Valuable Lessons Your Child Can Learn From Playing Video Games 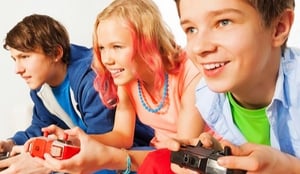 Australians are enamoured with video games and a recent survey has shown that more than two thirds of the population are avid gamers. While some people believe that gaming is just a shallow way to pass the time, 60 percent of those who were polled say that playing video games can be beneficial for students.

And over 50 percent said that their children use games for school purposes. Apart from being an interactive and fun way to learn, video games can also have surprising benefits for kids as they can pick up positive values and develop new skills from gaming.

Here are the valuable lessons your child can learn from playing video games.

It can teach them to become more decisive

Video games have proven to be an effective coping mechanism during challenging times. They can not only can reduce stress by serving as a distraction from what’s going on around the world, but also serves as a way to connect with others. But did you know that it can also be beneficial for a child's social skills and behaviour?

A University of Rochester study has found that playing action video games can help individuals to make the right decisions faster. And having an enhanced decision-making skill can help children in school as it improves their multitasking ability.

Learning to be decisive at an early age can also prepare them to become good leaders, and this trait can serve them in life and in their careers later on.

Some action games that can help to improve decision-making skills include Super Mario Odyssey, The Legend of Zelda: Link’s Awakening, and Call of Duty.

It teaches them empathy

Being able to empathise can prepare young children who have yet to go to school to be more tolerant and accepting of others, regardless of differences. Moreover, it also helps them to build solid relationships with other children and their teachers, thus preparing them for learning.

Video games such as Spent, That Dragon, Cancer, and Crystals of Kaydor allow children to develop an awareness of other people’s feelings and life situations, and this can bring about a positive change in the way they treat others.

They learn about teamwork

A school in New Mexico has recently formed what is reported to be the first academic middle school Esports team in the USA.

The competitive video gaming team is run like a varsity sports team, and members of the league find that the team-building aspects of gaming has helped them to become better players and to do well in academic subjects that require team effort.

Whether children are part of an esports team or an online group of players, playing games such as Rocket League, Overcooked, or Animal Crossing: New Horizons allows them to learn how to work as a team, communicate well with others, and develop self-confidence.

Playing video games can help a child to have empathy, to work well with others, and to have confidence in the choices that they make in their everyday life.

Make sure to manage their gaming time and pick non-violent games that are suitable for their age. You will see how gaming can help them to be better, kinder, and more capable individuals as they grow.

How to Make Online Learning Accessible for People with Special Needs

How Recording Yourself Improves Your Thinking & Learning