"The bottom line of all the research is that autism spectrum is very, very complex. There are probably as many different kinds of autism as there are children with autism spectrum disorders. So it isn't a unified group at all", said Dr Martha Burns in a recent presentation at a neuroscience learning conference in Tuscon, USA.

Here is an abridged version of her presentation about autism. Dr Burns said:

"We know that most of the research shows now that it's the long association fibre tracts that don't mature in autism spectrum disorders. But it's not the same for each child. Every child is a little bit different.

There are also other things that go on in autism. A new study that just came out in December 2014 that showed that boys with autism spectrum disorder tend to be different than girls. They've got way too much testosterone and the testosterone is affecting all sorts of things like their digestion and other aspects of just body maturation and health and their immune system.

But you are a parent looking for a cure. Every parent out there with an autistic child is desperate. They are desperate because the children look normal, they started out looking normal - you'll see why in a minute and then all of a sudden they start to vary. And they vary in behaviour and social skills and parents tend to feel like that's their fault.

And they don't want it to be their fault and so they are looking for some simple thing they can do like getting rid of gluten in their diet to make their child normal.

It's highly genetic. We know from research published in 2013 that if you just look at the number of mutations, genetic mutations a baby has, those that have more than three mutations of certain kinds of genes are the ones that have autism spectrum disorder.

And there are over 150 genes implicated in autism spectrum disorder. So what do the genes do? One of the things they do is affect the development of the maturation of these long fibre tracts.

What is so scary for a parent? This research shows it. It’s when you look at the autistic children, children on the spectrum, this is when they are three months of age, this is when they are three years of age, essentially a little over two and a half. They start out with more myelin. They start out with fibre tracts that are more mature than a typical child in a way, because they have more myelin.

Autism is a disorder of brain maturation

But what happens is as they develop, as they mature, the brain actually gets worse at maturing. So you can think of autism spectrum disorder as a disorder of maturation. The children look perfectly normal when they start out. That's what's so scary to these parents. That at three months old he looks fine, that a four month old was smiling at you, who seems to be really smart, who's making noises and sounds.

And it's all these major fibre tracts. Now what Wolfe, who did the study in 2012, concluded is that the core behavioural manifestations, what we see in autism, the atypical patterns are caused by this lack of connectivity. It’s like mobile phones that aren't communicating. The parts of the brain aren't talking to each other.

But they are not specific to one region of the brain, they are all over the brain and they differ across different systems and over time. So there's tremendous variability.

Science is clarifying some of the genetic risks

The science is now clarifying some of these genetic risks, and we are starting to figure out which genes are doing what to the brain. The new research is clarifying the effect on the brain structures, especially this white matter and these fibre tracts.

But it's continuing to support the value of targeted therapeutic interventions. Not things like diet but actual targeted interventions that drive white matter maturation. And if there is any program that was ever developed that drives white matter, it's Fast ForWord. That's what it was designed by to do by Dr Michael Merzenich and Dr Bill Jenkins. That that was the main idea behind it.

Now, some newer research that just came out this year also says, 'not only do the long fibre tracts not mature...' but remember those fingers I told you about, those dendrites? Those have to be pruned. And it turns out that they aren't pruned you'll have too many fingers (dendtites) grabbing on to all of these fibre tracts.

What that does is it makes the brain very noisy. So I say, imagine if you had a rose bush, if you are a gardener and you don't prune it. What happens? You get long tendrils, really long tendrils that never grow a rose, because all the energy is going into producing these long branches. And the bush never produces roses, therefore it never produces seeds, therefore it never really can even reproduce itself. It's a non-functional rose bush. That's why we prune them. 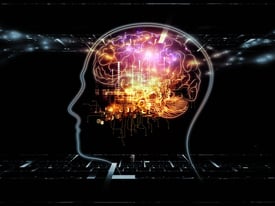 Well, the brain has to be pruned for the same reason. It turns out new research that was just published September last year, by Tang shows that there is a loss of this pruning as well in autistic brains. So not only do you not have the long highways, you also have very noisy neurons that are getting stimulation from hundreds of different fibre tracts. Does that make sense?

So that's why the autistic child does this (Dr Martha Burns puts her hands over her ears). Because all this information is bombarding them and they can't figure out what's relevant and what's not relevant and they shut down. Got it? A noisy brain shuts down.

And one of the places where you have the biggest problem with pruning is the temporal lobe. And what does the temporal lobe do? In the left hemisphere, it's all about speech perception. So one of the biggest problems that we have with this pruning deficit is a noisy temporal lobe where speech isjust as loud as a car honking, as the noise that's being generated from this speaker, from anything that somebody might be doing next to you. All of that is going to have the same loudness to you. The world is going to be noisy and complicated and you are not going to be able to sort our what really matters and what doesn't.

So the core of autism... one core of it is this maturation of the fibre tracts. Another core is this problem with the noisy temporal lobe which is going to affect your ability to learn speech and language. For every child on the autism spectrum, there are three components that we use to describe autism. One is repetitive behaviours, one is a problem with social skills and what's the third? What does everybody know? Language. Every child on this spectrum has a language disorder.

If you are on the autism spectrum, you have this noisy brain but it also means that the brain is over excited. You can't inhibit some of the stimuli. So as I said, that projector in this room, if you were a child on the spectrum, the noise coming from that projector would seem extraordinarily loud to you and you'd have trouble tuning it out.

Who's the first person who said this? Does anyone know? That autism spectrum is a disorder of problems with balancing what's exciting the brain versus the ability to inhibit some kinds of stimuli. Dr Mike Merzenich in 2003. He wrote the first paper on it. He designed Fast ForWord, with Dr Bill Jenkins and others.

We know how effective the Fast ForWord language program is for children who have language disorders. We've known it since our original research trial. The big change you get is in language skills. So when I have a parent who has a child who is on the spectrum, I don't necessarily know that it's going to change their social skills. It might, because you might drive some of those fibre tracts that are going to help them pay attention to social skills, to social cues.

But what you can say with confidence is that this is a tool when combined with all the other tools that you are going to need in autism interventions, is guaranteed to improve the child's language skills. We've got good evidence to support that. 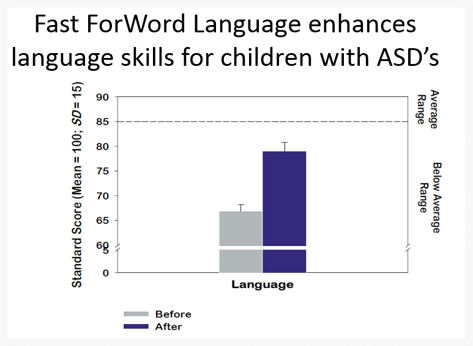 With autism, we know that one of the things Fast ForWord does, we've known it since the original field trial, is improved language skills. And as long as that's what we communicate to parents of autistic children, Fast ForWord is not a cure, not a diet, not something that says these kids are going to be totally normal children in six months. But can it improve their language? You bet it can. Can it improve their auditory processing? You bet it can.

One of the things that was occurring to me during our discussion of autism is when I've had a regular client caseload, the length of stay for children on the autism spectrum is 10 years. Nine to 10 years. I'll get them at three and I'll keep them all the way through high school. Now that's not just Fast ForWord obviously but it takes a long time with a severely autistic child. So if we have a child who has low functioning or mid-functioning autism, they are maybe on the Language program for a year before they start to move.

So your length, your duration is much longer with autism. But you've got to keep the parents engaged because parents are desperate and they'll hop on you. They are getting impatient and frustrated. So a big part of my job as a practitioner is to keep the parents understanding what I'm doing and trusting me. Trust is 90% of my job".

Can Comic Books Help People With Autism Make Sense of Their World?