The Brain That Changes Itself by Dr Norman Doidge: Book Review 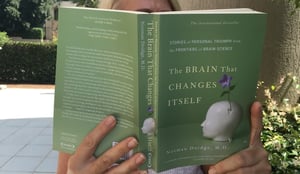 Dr Norman Doidge's best selling book , “The Brain That Changes Itself” did more than any other to change our view of the brain’s ability to “rewire”.

While Dr Doidge published it around the middle of the last decade, it remains an easily readable, fascinating account of how we came to know that brains are “plastic”.

Scientists, educators, and parents had believed brains are “hard-wired” - our abilities are limited by the structures in our brains.

In “The Brain That Changes Itself” Dr Doidge explains how that old belief has been replaced by the knowledge of “brain plasticity" – our abilities can be changed and improved by various forms of mental exercises.

For example, he explains how the Fast ForWord neuroscience program exercises the brain to improve its functioning for reading and learning.  He discusses how brain scans before and after the exercises show that brains of children with reading difficulties become similar to children who read well.

If you are not familiar with the book, read the New York Times Book review in May 2007 by Abigail Zuger. It is reprinted below.

In bookstores, the science aisle generally lies well away from the self-help section, with hard reality on one set of shelves and wishful thinking on the other. But Norman Doidge's fascinating synopsis of the current revolution in neuroscience straddles this gap: the age-old distinction between the brain and the mind is crumbling fast as the power of positive thinking finally gains scientific credibility.

The credo of this revolution is neuroplasticity — the discovery that the human brain is as malleable as a lump of wet clay not only in infancy, as scientists have long known, but well into hoary old age.

In classical neuroscience, the adult brain was considered an immutable machine, as wonderfully precise as a clock in a locked case. Every part had a specific purpose, none could be replaced or repaired, and the machine was destined to tick in unchanging rhythm until its gears corroded with age.

Now sophisticated experimental techniques suggest the brain is more like a Disney-esque animated sea creature. Constantly oozing in various directions, it is apparently able to respond to injury with striking functional reorganisation, and can at times actually think itself into a new anatomic configuration, in a kind of word-made-flesh outcome far more characteristic of Lourdes than the National Institutes of Health.

So it is forgivable that Dr. Doidge, a Canadian psychiatrist and award-winning science writer, recounts the accomplishments of the “neuroplasticians,” as he calls the neuroscientists involved in these new studies, with breathless reverence. Their work is indeed mind-bending, miracle-making, reality-busting stuff, with implications, as Dr. Doidge notes, not only for individual patients with neurologic disease but for all human beings, not to mention human culture, human learning and human history.

And all this from the fact that the electronic circuits in a small lump of grayish tissue are perfectly accessible, it turns out, to any passing handyman with the right tools.

For patients with brain injury, the revolution brings only good news, as Dr. Doidge describes in numerous examples.

A woman with damage to the inner ear’s vestibular system, where the sense of balance resides, feels as if she is in constant free fall, tumbling through space like an ocean bather pulled under by the surf. Sitting in a neuroscience lab, she puts a set of electrodes on the surface of her tongue, a wired-up hard hat on her head, and the feel of falling stops. The apparatus connects to a computer to create an external vestibular system, replacing her damaged one by sending the proper signals to her brain via her tongue.

But that’s not all. After a year of sessions with the device, she no longer needs it: her brain has rewired itself to bypass the damaged vestibular system with a new circuit.

Surgeon recovers from a stroke

A surgeon in his 50s suffers an incapacitating stroke. He is one of the first patients to enrol in a rehabilitation clinic guided by principles of neuroplasticity: his good arm and hand are immobilised, and he is set cleaning tables. At first the task is impossible, then slowly the bad arm remembers its skills. He learns to write again, he plays tennis again: the functions of the brain areas killed in the stroke have transferred themselves to healthy regions.

An amputee has a bizarre itch in his missing hand: unscratchable, it torments him. A neuroscientist finds that the brain cells that once received input from the hand are now devoted to the man’s face; a good scratch on the cheek relieves the itch. Another amputee has 10 years of excruciating “phantom” pain in his missing elbow. When he puts his good arm into a box lined with mirrors he seems to recognise his missing arm, and he can finally stretch the cramped elbow out. Within a month his brain reorganises its damaged circuits, and the illusion of the arm and its pain vanish.

Research into the malleability of the normal brain has been no less amazing. Subjects who learn to play a sequence of notes on the piano develop characteristic changes in the brain’s electric activity; when other subjects sit in front of a piano and just think about playing the same notes, the same changes occur. It is the virtual made real, a solid quantification of the power of thought.

From this still relatively primitive experimental data, theories can be constructed for the entirety of human experience: creativity and love, addiction and obsession, anger and grief — all, presumably, are the products of distinct electrical associations that may be manipulated by the brain itself, and by the brains of others, for better or worse.

For neuroplasticity may prove a curse as well. The brain can think itself into ruts, with electrical habits as difficult to eradicate as if it were, in fact, the immutable machine of yore. Sometimes “roadblocks” can be created to help steer its activity back in the desired direction (like bandaging the stroke patient’s good arm). Sometimes rewiring the circuits requires hard cerebral work instead; Dr. Doidge cites the successful Freudian analysis of one of his patients.

And, of course, the implications for external re-engineering of the human brain are ominous, for if the brain is malleable it is also endlessly vulnerable, not only to its own mistakes but also to the ambitions and excesses of others, whether they are misguided parents, well-meaning cultural trendsetters or despotic national leaders.

The new science of the brain may still be in its infancy, but already, as Dr. Doidge makes quite clear, the scientific minds are leaping ahead.