Technology in the classroom. Are we there yet?

Recently I visited a school to talk about technology implementation issues. Yes, despite the fact that we’ve come so far, there were issues to talk about.

It was a good reminder of the fact that as technology changes, or develops and improves, we as humans are essentially still the same. Our collective knowledge is growing, and we are making great advances in progress, but we as physical human beings are largely the same as we always have been. Some may say that this is not quite true because we are getting taller, living longer or becoming more resilient, but I’m referring more to the fact that our basic physical bodies are the same. In an increasingly digital world, you could say that we’re analogue, and always will be. Why is this pertinent with regards to my recent school visit? 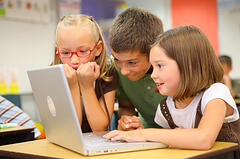 The answer is that despite our very best efforts to keep up with technology in education, it will be a constant effort. Year after year I imagine that one day we’ll just have it all sorted out and that we’ll be able to get on with the real teaching and learning. But I’m not sure this is actually correct. Learning about the technology and how it can change the way we work to make our days, and learning experiences better will be an ongoing task. It got to the point in discussions at my recent visit that teachers started to wonder if it would just be simpler to use pen and paper and a textbook. We’re considering the full circle argument already.

Jobs to be done

One of the grounding concepts in all this is the idea put forward by Clayton Christensen (Christensen and Raynor 2003) of ‘jobs to be done’. It was one of the things I put forward to teachers in this visit. It almost sounds too simple, but it’s the idea of asking what it actually is that you’re trying to get done and why. This will put you in a better place to figure out what technology you really need in order to do what it is you’re trying to do. Too simple? Maybe so, but in today’s world of ever increasing complexity it’s rather refreshing. For example, rather than downloading a film from iTunes or Google Play, syncing it to a mobile device and then wirelessly air sharing it from a media streaming device over wifi to an HD smart television, wouldn’t it just be easier to press ‘play’ on a DVD player? This is not a luddite argument, but it does bear thinking about when all you ever seem to hear about is the ‘next big thing’.