Talk to Your Children - Build Their Language & Learning Capacity 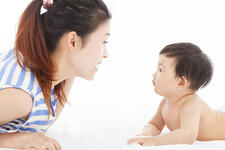 Most parents instinctively know that talking to their babies and young children helps them develop their language.  The more words young children hear, the greater is their command of language, including vocabulary.

Studies have shown that children with low language skills in kindergarten can fall as much as 5 years behind their classmates in reading by the time they are in high school. This leads to difficulties keeping up in school and can create lifelong problems.

The chart on the left below shows that there is a large gap between the number of words children hear in high social and economic status (SES) homes compared with children from lower SES environments. This is from an American study and the results will not necessarly be the same in Australia and New Zealand. However, the key point is that childen who grow up in households where they are spoken to less than others can fall behind as they get older (shown in the graph on the right below).

Now new research from Northwestern University in Chicago, USA indicates that young children get much more than language-learning when they listen to speech. The researchers say that it also develop infants' fundamental cognitive and social psychological capacities that form the foundation for learning.

So just speaking to your children will help build their learning capacity.

One of the researchers said, "Infants as young as 2 or 3 months of age not only love to listen to speech, but they learn about fundamental cognitive and social relations better in the context of listening to speech than in any other context we've discovered yet. Nobody would have thought that."

Really, nobody though of that? I think most parents have always known that speaking to their babies is good for them, even if they did not know the specifics of how  their infants are gaining language and at the same time building their brains for learning.

Nevertheless,  the message for parents is that you should start talking to your babies as soon as they are born, and never stop.  The more words they hear, the better they will be able to learn.