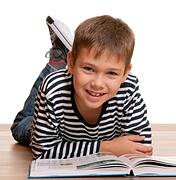 Rubin was in his first year at school (kindergarten in NSW). His teachers told his mum, Lani, that he was not concentrating, he fidgeted a lot, and he could not complete his work.

He was also having great difficulty with his early reading, struggling to sound out simple sentences like "I am Tim. Tim sits."

Because his older brother Kito* had benefited from the Fast ForWord brain training exercises a few years ago following an audiologist's recommendation for his auditory processing disorder, Lani decided to have Ruben do the exercises as well.

Lani says, “Yes, what an absolute godsend the Fast ForWord program has been for us. He did it in term 4, 2014  - his kindergarten year. Then when Ruben started year one this year, 2015, he had jumped from a reading level 3 to a level 16 reader! So that’s an enormous gain”.

“And his attention has also improved hugely. The teachers no longer complain that he is not concentrating or completing his work”.

“But you and your child have to commit to doing it as it is supposed to be done. So, half an hour every day, five days a week.”

Lani explains, “We just had him re-assessed by the audiologist to see how he's going because he started high school now. And, it seems like that change was permanent because she says his auditory processing is absolutely normal now”.

“And, I mean that's the only thing that we did with him. We didn't do anything else. So, it had to have been that program”.

“He used to have trouble with conversations with our family back in South Africa. They have really strong accents. So, it was quite hard for him. But Fast ForWord made such a big difference and he is easily able to do that now!”

How Can I tell if my child has Auditory Processing Disorder?