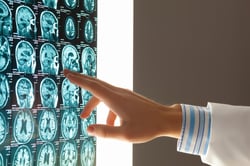 It is fairly well understood that a good night’s sleep helps us learn better.

Now scientists have discovered people who take short breaks while learning a new skill make more gains than after a night's sleep.

In a Study at the USA National Institutes of Health 33 right-handed volunteers were shown a five-digit code "41234" on a screen and asked to type it out with their left hands as many times as possible for 10 seconds and then take a 10 second break. Subjects were asked to repeat this cycle of alternating practice and rest sessions a total of 35 times.

Their brains were scanned with a highly sensitive technique called magnetoencephalography.

The scanning showed that during rest the volunteers' brains rapidly and repeatedly replayed faster versions of the activity. And the more a volunteer mentally replayed the activity the better they performed during subsequent practice sessions. This suggests that during wakeful rest the brain binds together the memories required to learn a new skill, according to the scientists.

“Wakeful rest plays just as important a role as practice in learning a new skill. It appears to be the period when our brains compress and consolidate memories of what we just practiced," said Leonardo G. Cohen, M.D., senior author of the study published in Cell Reports.

Parallels with The Inner Game books

This research has parallels in the ideas expressed in the inner game books - such as The Inner Game of Tennis, Golf, Skiing etc which were published many decades ago. The main idea of the “inner game” was that mentally rehearsing skills of the game while not actually playing it, improved the learners' performance.

I tried this myself with snow skiing. I imagined skiing down the ramp at my local railway station, and did this over and over.  The next time I went skiing it seemed as though I had improved.  This latest research suggests that I wasn't imagining it.

Top Brain Games that Improve a Student’s Focus and Attention