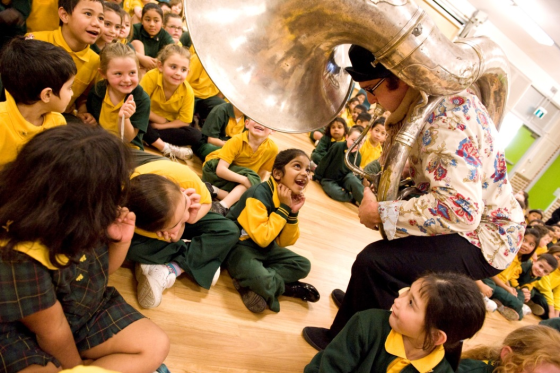 He expected the reactions of the teachers he spoke to would range right across a spectrum from "oh no" to " I love it", and that's what happened. But something unexpected also happened. He saw distinct regional/state differences in what others thought.

Fuller disclosed what he saw in a conversation on The Learning Capacity Podcast.

He also described how two traditional music classrooms in the school were transformed into a single music learning space where he used "catchphrases"  to inspire a positive classroom culture and innovative music teaching.

The challenge was to transform two very traditional music classrooms into a special learning space where students could be inspired to work together with the teacher to develop their music creativity and performance skills. In keeping with Brad Fuller's use of "catchphrases"  to change how students and teachers perceive their work, the project was named "Project R & B" (R for rhythm and B for blues).

A philosophy of " It's all about the gig"  was used to guide the design of the space. By " the gig", Fuller means the performance, or the show, or the creative output.

"If it is all about the gig, and if performance is important for musicians, and if that old adage of practice makes perfect, why then would you build a room with desks and chairs and a whiteboard? How does that prepare you to be a musician?

"So the music space needs to be a performance space and that's what we built. And we built zones around it that students could go to do the various things a musician does:

Reactions from other educators

The best reactions were consistently from Victoria, according to Fuller, where he says "Victoria seems to have a real momentum and excitement around innovation in education".  Other regions were not as enthuiastic. Listen to the Podcast to hear how educators in Victoria and other states responded to Brad Fuller's message of music learning innovation.

Is Playing Music a Form of Brain Training?