How Can Teachers Detect Auditory Processing Disorder in the Classroom? 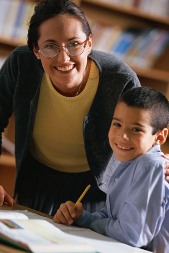 What are some of the signs teachers can recognise that may suggest that a student has auditory processing disorder?

Key points from the interview include advice that teachers should look out for students who:

Interviewer: Devon, getting straight into the practical sides of what to do with auditory processing disorder. How might we recognize it in the classroom?

Devon Barnes: One of the most common features that a teacher would notice is a  delay before the student responds to a question or an instruction. So the teacher might say to the student, "Get out your maths book and find chapter three," and your student with auditory processing disorder will just be sitting there for a few seconds thinking, "Um, what did she ask me to do?" They might even look at their neighbour to see what they're required to do.

Interviewer: So straight away a practical thing for the teacher might be to wait a little bit before perhaps repeating the instruction just to see whether the answer or the action is actually about to come?

Devon Barnes: That's exactly right because quite often with these children it's not that they're not understanding what the teacher has said but they just are slower to process that information so...

Interviewer: We just don't give them the chance?

Devon Barnes: That's right, that's right. Also for a child with auditory processing one of the most common symptoms is that there are very bothered by background noise. So if there's extraneous noise in the classroom they'll have much more difficulty processing what the teacher's saying.

Interviewer: So acoustic treatment of classroom would be a pretty good idea?

Devon Barnes: Very much so, and quite a simple thing to do these days. Another issue for children with auditory processing is that it can very much impact on the development of their literacy skills.

Interviewer: Related to that I suppose might be their social development, how they perceive different types of language like compliments or sarcasm?

Devon Barnes: Exactly because auditory processing disorder is very closely associated with the perception of language. So if you're not processing what you're hearing, you will have difficulty with aspects of language.

So one of the issues with this condition is difficulty in understanding differences in tone of voice. They might confuse a sarcastic comment with a criticism so if the teacher is saying, "Gee that was smart," compared to, "That was smart," your child with auditory processing isn’t going to perceive those fine differences and they can feel very upset with a misinterpretation of a message.

Interviewer: So with perception of language I guess accents would come into that as well if a student had a teacher with a very heavy accent?

Devon Barnes: That can be a huge problem for a child with auditory processing disorder because one of the other difficulties that's been very well documented is when the speech signal is in any way  “degraded”.

It just means that the signal is not ideal. So that could be a teacher with a foreign accent, a teacher with a hoarse voice, the teacher just has a cold or laryngitis, and so the speech isn't going to be as clear as normal and that will impact on a child with APD.

In fact I had a student this year who had to be moved out of a class purely because the teacher had a foreign accent and he just could not cope in that classroom whereas the other children didn't have a problem.

Interviewer: So what would you say to a teacher who might think that there could be some problems in the classroom but they're not really sure what to do, or maybe they don't know whether they're just trying to guess too much as to what the problems be? I mean what's the next thing a teacher can do?

Devon Barnes: Well I think in an ideal situation the teacher needs to speak with the parent, and maybe if possible organize an assessment for the child, and in that assessment we need to look at quite a few things.

We need, first of all, to make sure that the child can actually hear. Then we need to look at their language skills, and possibly their cognitive skills, and then possibly have a specific assessment for auditory processing disorder if they can access that.

Interviewer: What about daydreamers?

Devon Barnes: Well they're an interesting group of children.

Interviewer: I mean I like to daydream. Does that mean I have auditory processing disorder?

Devon Barnes: Not necessarily. I think daydreaming can be a result of three different conditions, and very often it's hard to distinguish between the three. Sometimes very, very bright children, very gifted children, are lateral thinkers and so they'll have an idea and their brain will just go off with a new idea and that takes them off to this wonderful world of ideas.

Then you have your child with ADHD, inattentive type, who just cannot sustain their focus for any length of time in the classroom, and it usually applies to any activity whether it's auditory, or visual, or whatever they're doing. A child with auditory processing disorder can appear to daydream but what we find is they'll only switch off when they're having to deal with a lot of verbal instruction, verbal information.

So it's like their brain just gets overloaded. So once the brain is overloaded with auditory information and cannot process one more iota then they will appear to switch off and daydream. But in fact it's just because the auditory system's reached its capacity at that point in time.

Interviewer: Daydreaming is I guess you could say a passive response. Does it go the other way as well? Like do the students go a bit crazy?

Devon Barnes: With auditory processing? I think particularly the students that are very bothered by background noise and continually frustrated because they're missing a lot of what the teacher's saying. If there's a classroom discussion, they get very lost in that as well, and so that can be very distressing, and they're not achieving as well and so they can very upset.

Interviewer: So they might not just actually be badly behaved. They've really got a problem and they need help.

Devon Barnes: Absolutely, and I think with any child with any behaviour problem there's always a reason. No child misbehaves for no reason.

So it's the challenge for the teacher then to try and understand where that behaviour is coming from.

Interviewer: That's a bold statement, but I guess you've got some 40 years of experience in being able to form that opinion.

Interviewer: You seem pretty confident of that.

Interviewer: Now you've got a whole bunch of strategies that we can use in the classroom, but we'll come to those in another video. Devon, thank you.