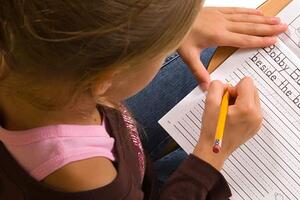 Children today are doing much less handwriting than children did 20, 30 or 40 years ago. Before computers became commonplace, handwriting was much more important for everyone. Back then schools put considerable time and attention on making sure students developed their handwriting.

I recall entering cursive handwriting competitions when I was a young child (I went to primary school in the 1950s), and the sense of pride for the kids who were judged the neatest writers.

Now, typing on computers and tablets is replacing the act of writing by hand for many students (and adults).

This trend is certain to continue as technology evolves and voice recognition systems become commonplace (I wrote this using my laptop and Dragon Dictation software). It will probably not be long until even the act of typing on a keyboard is fully replaced by simply talking at the device.

So should parents and educators give up on handwriting for their children? Is handwriting a skill that is useful sometimes, but no longer really necessary? Is it just a relic of the past?   Or is there a connection between handwriting & learning?

Evidence for benefits of handwriting

Consider some of the evidence that suggests handwriting skills can make learning easier.

New evidence suggests that the links between handwriting, memory and broader educational development run deep. According to a number of studies, children not only learn to read more quickly when they first learn to write by hand, but they also are better able to generate ideas and retain information.

In other words, it’s not just what we write that matters — but how.

Some of the studies:

“When we write, a unique neural circuit is automatically activated,” says Dr Dehaene. “There is a core recognition of the gesture in the written word , a sort of recognition by mental simulation in your brain. And it seems that this is contributing in unique ways we didn’t realise. Learning is made easier.”

Using brain imaging technology, Dr James studied children who had not yet learned to read and write. They were given a letter on a card and asked to reproduce it in one of three ways:

Her study found that the children who had drawn a letter freehand had increased activity in areas of the brain that are activated for reading and writing. The children who typed or traced the letter showed no such effect.

Dr Berninger found that children who wrote by hand expressed more ideas than a comparison group who wrote with a keyboard. In addition, brain imaging studies showed the handwriting group had greater brain activation in areas associated with working memory and in the parts of the brain known to be active in reading.

This study found that in both laboratory settings and real-world classrooms, students learn better when they take notes by hand than when they type on a keyboard. This may be because writing by hand allows the student to better process the lessons and so understand and remember more.

Six Ways You Can Improve Your Writing with Neuroscience Insights