A school principal recently said to me, “I’ve heard of Fast ForWord but there is no evidence that it works, is there?”

That wasn’t the first time I had heard that.

I’m always amazed when people say there is no evidence of Fast ForWord’s effectiveness. If they only looked, they would find hundreds of journal articles and school case studies with many examples of the success of over 2.5 million individuals who have done Fast ForWord over the last 20 years.

That’s what good science is about: examining the preponderance of evidence from all sources – academic research, commercial patents and real world results. Transforming the ground-breaking research to practical educational tools is reflected in the number of patents - commercial protection for the innovation.

In 2014 the developers of Fast ForWord announced their 80th patent - Awarded Patent For Innovative Method To Build Critical Thinking And Abstract Reasoning Skills - and there have been more since.

But skeptics will conveniently narrow their definition of evidence to suit their point of view.

Do you think it’s fair and reasonable if someone formed their opinion on a few papers with poor implementation (see below)? And ignored several hundred other reports and case studies?

You will get an overview of the evidence in this article. It’s an overview because we would need a large book for the massive amount of evidence accumulated since Fast ForWord was developed in the mid 1990s. In fact you can download a list of some of the reports & school studies at the end of this article. You will see it alone is over 70 pages.

What is Fast ForWord?

But first, to check the evidence, we need to understand what Fast ForWord is.

It’s neuroscience-designed software which improves a student’s capacity to learn any subject …. when used according to research-based implementation protocols (how often and for how long the student needs to do the program). The software was developed about 20 years ago from ground breaking, foundational neuroscience research over the previous 25 years.

And the scientists use the data from millions of users over the last two decades to continually improve and refine Fast ForWord. That’s research for 45 years and counting. The data is collected in accordance with data security laws.

This remarkable program is one of the most extensively researched of its type in the world. It's the software PLUS precise implementation protocols, including appropriate intervention support.

The PLUS is important.

The protocols are a prescription: how often to use the software, how many times a week, how long each time and the duration of use (months until completed).

You can think of the Fast ForWord usage protocols like doses of medicine.

If a doctor tells you to take a pill every morning on an empty stomach, and you take it only a couple of times a week, after a big meal in the evening, you can’t expect the pill to be as effective.

It’s the same thing with Fast ForWord. If you don’t use the neuroscience - designed exercises according to the prescribed dose/protocol, you can’t expect to get the results.

Fast ForWord is more than software. It’s the software PLUS the implementation protocols. You need to understand this when looking at the evidence.

That’s because some studies claiming to assess Fast ForWord did not use the prescribed protocols. And guess what? Those studies concluded the students didn’t benefit.

More than a single program

A common misconception about this educational neuroscience program is that it’s one program. In fact, there are 11 programs in the Fast ForWord123 suite, covering:


Some commentators who haven’t taken the time to fully understand what they’re commentating on, think Fast ForWord is just a reading program. It’s much more. Evidence shows it builds the four elements of language: listening, reading, writing and speaking.

Students who use Fast ForWord according to the prescribed protocols develop their capacity to learn. They build the cognitive skills and language skills essential for learning.

The cognitive skills are: The language skills include:

The neuroscience exercises also help a range of learning difficulties including:

What sort of evidence do you need?

The evidence for Fast ForWord includes all these.

Here is a summary of a few of the many papers.

Stanford University 2003 & 2008 (Proceedings of the National Academy of Sciences, 100(5), 2860-2865)
Scientists at Stanford University showed dyslexic brains can be rewired with Fast ForWord. And as well as physical changes in the brain seen by brain imaging, the dyslexic students reading also improved.

What would you think about this “scientific evidence”?

What would you think if someone said Fast ForWord is “not recommended”, but they had not used the program or supervised children using it? And they based their opinion on research by a group of people who had also not used it?

And what if that group of people based their opinion on six studies of people who did supervise some children using Fast ForWord. But five of the six studies did not use the recommended protocol?

Remember, if you don’t take the correct dose, the medicine won’t work.

So, 5 of the 6 studies did not really use Fast ForWord. They used the software, but not as prescribed by the science.

Does that sound like a reasonable basis to make a judgement about whether Fast ForWord is effective or not? I don’t think so.

Well that’s exactly what a group from Macquarie University in Sydney did. Their special education centre (MUSEC) published a briefing, “MUSEC Briefing #28” which concluded: “not recommended”.

You can read all about it here.

When you do, you will see the researchers in 2 of the 5 studies acknowledged their implementation problems. Then they both conducted further trials using the correct protocol “dose”. And guess what? They found greater impacts on reading scores among students who had better program use.

You will also read that the study with the best implementation found:

How could Macquarie University’s MUSEC ignore this evidence? How could MUSEC look at only one article and ignore the preponderance of evidence of several hundred other research papers and school studies?

Most teachers are more interested as to how the research translates into school environments, particularly in their own countries.  Here are some results from Australian and New Zealand schools.

“I’ve too many good results here with a range of children to not give all the kids an opportunity to do it. I've seen that bright kids also benefit from Fast ForWord. It's not just for those kids who are really struggling”, said Head of Junior School.

Narooma Public School – NSW
The growth of 90 Fast ForWord students from Year 3 to Year 5 on the NAPLAN assessment exceeded a control group (students in the same year group, with the same curriculum).

Doubled the number of children on the program because Fast ForWord was so successful for a group of struggling students.

“They now seem more alert and engaged and will hold a conversation and some of them will often instigate the conversation rather than avoiding it. Their memory has improved; their ability to follow instructions has improved.”

“I think it's a no-brainer, for lack of a better word. I've seen enough for five years to tell me that it works and it will work particularly well for those kids who have learning difficulties, but it's going to work for all your kids,” said the school’s Principal.

The students in the Fast ForWord group made significant gains in receptive & expressive language and literacy skills. They outperformed their control group peers who did not use Fast ForWord.

A study commissioned by the Nevada Department of Education concluded:
Fast ForWord increased student reading achievement by an average of 22.2%. This was the largest average impact of all programs reviewed in the report.

Longitudinal results – shift the bell curve to the right

Because the neuroscience-based exercises in Fast ForWord give students intensive training which adapts to everyone’s level and provides timely motivation, the results can be achieved quickly – often in a semester or two.

But the changes are also enduring. Once the neuroscience training is complete the brain has physically changed and hence the benefits remain.

A 10-year study of 4,000 students in a group of underperforming schools shows the gains against the state average. And they increased compared with the rest of the state’s schools when the test (like Australia’s NAPLAN) was changed in 2016.

This suggests that once the students’ learning capacity is improved, they can handle unfamiliar challenges. But the non-Fast ForWord students, who may have been “taught for the test”, didn’t do as well. 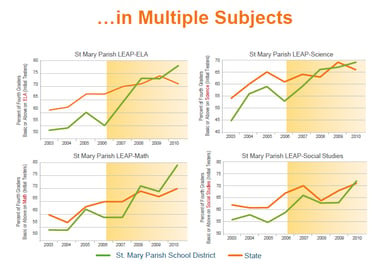 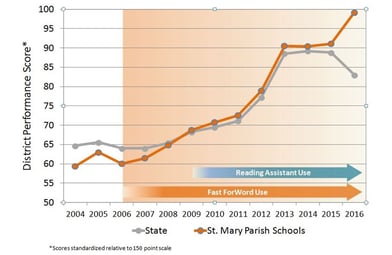 Here are just a few of thousands:

Here is what one father, Dr Con Kafataris, said about how Fast ForWord helped his son:

“The science seemed plausible and I just thought this makes sense. The results have been quite phenomenal. He's now reading books himself. His speaking has dramatically improved. It's just been amazing to watch”.

And this was posted about Fast ForWord on Facebook by a mother:

“My son has Aspergers and he see speechies, OTs and psychologists. They have all thought this a good program to pursue. He improved 18 months on his VELS score in one semester’s reports by using this program”.

“Not through any school help. They acknowledged he had a problem and that we would just have to be aware and work harder with him”.

“My second son who also sees a speechie & is waiting until he is older for an Assessment to see if he has Auditory Processing problems. He has done the age relevant program and our speechie is amazed at the improvement in his sound recognition and concentration”.

“You can use your independent opinions. I'll stick to my experience based evidence”.

Whatever type of evidence you rely on, it’s available, in bucket loads, for Fast ForWord.