"The latest area that neuroscience is exploring is this whole area of self-regulation, cognitive control", said Dr Martha Burns in a recent presentation about these issues and how the Fast ForWord programs help.

Here is a summary of her talk:

"Can a student sit still? Can they listen to the teacher? Can they get through an assignment without getting up and doing 100 other things?

Can we decrease their impulsivity? Can students get their assignments done on time? That's more cognitive control. Can they actually sit down, have an assignment, finish it and hand it in?

One of the things that the Fast ForWord neuroscience program does is improve the ability for a student to sustain their attention for longer periods of time. That means that they can sit and get something done.

It's the students who have no self-control. Who can't sit in the classroom. Who are antsy and bored and frustrated and impulsive and have behaviour problems.

Two systems of self control

So there's a big emphasis on behaviour problems. And what neuroscience now is doing is saying there are two systems of behaviour, of self-control. 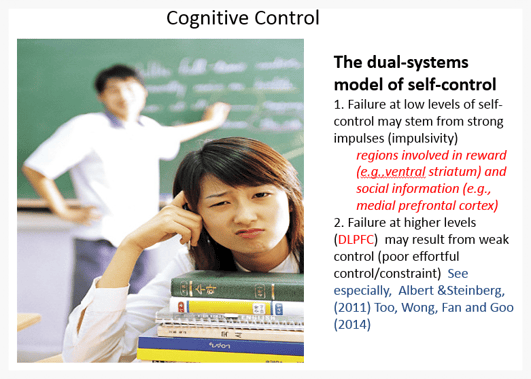 One is what I call the failures at low level. Somebody who's just can't delay gratification. They go for instant reward. They are very impulsive, they act out all the time. They have lack of constraint.

These are the kids in our classrooms, in the US who are called BD. Behavioural disorders. That's harder to control. That's probably better controlled by medication. And that's where neuroscience is going because it's a very deep primitive structure. This is the limbic system. It's the same brain. If you take off the brain here and just have the limbic system, it's the same brain that a gecko has. That a reptile has.

But what we can drive is this aspect of self-control, this pre-frontal cortex and we post your parietal lobe. How do I know that?

From Dr Temple's research in Dr Gabrielle's lab. These are the parts of the brain that we see dramatically improved after we have students go through Fast ForWord. This is shown by a major fMRI study. And these are the fibre tracts that control those areas. This is the inferior parietal lobe, this is the frontal lobe.

Notice that they mature from about five to 10 years of age. Then there's a lot of pruning that goes on that fine tunes them and then they mature again in adolescence. This is why most of you don't want to trust your 16 year old son to make decisions about his life.

Because he still has more maturation to go out of the part of the brain that's goal oriented. It actually goes into remission in adolescence. Probably related to hormones. But the point is, the neuroscience exercises drive those two regions of the brain. And they drive it in young children and they drive it in older students as well.

So components of cognitive control then, which is huge in neuroscience, selective and sustained attention or what you think are his listening skills, and working memory are integral parts of the Fast ForWord exercises. Built in to every single aspect of the exercises. If you combine them with Reading Assistant, you also are helping to develop self regulation and goal setting. To a great extent, the exercises drive regulation by decreasing impulsivity.

Can you develop your frontal lobe to the point where you can be so goal oriented, so purposeful that you are able to override the impulses you have to do things that are self destructive? We had a few schools in the United States for behavioural disorder students that used the neuroscience exercises for several years up in New England. And they showed some remarkable results with their behavioural disorders students.

But just to look at how Fast ForWord and Reading Assistant increase the self control.

The part of sticking with the Sky Gym exercise, sticking with the Hoop Nut exercise in those early stages is not just clicking over and over again. You don't want the happy clicker. One of the things you do in support is to get the child to slow down.

I'm working with a child now, and he keeps swiping the iPad and closing the program down. And I said, I know that what we've got to do is slow him down. He's got to listen and then respond. Not just start punching at the computer. Because that's what a child who's impulsive will do".