Do Girls Really Have More Maths Anxiety than Boys? 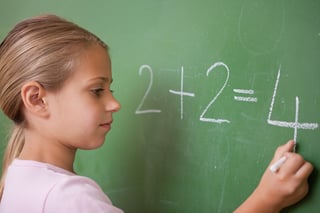 This seems to support the clichéd belief – boys are good at mathematics and sciences and girls are good at the more artistic subjects.

The study found the sexes are equal in mathematical capability. But girls have a negative emotional association with STEM subjects. And this holds females back, the study revealed. This results in fewer females than males taking maths programs at university. (STEM stands for Science, Technology, Engineering and Mathematics).

The University of Missouri-Columbia combined data on 15-year-olds from more than 60 countries and economic regions, including the US and the United Kingdom. The researchers found female parental role models and various policy initiatives designed to encourage girls into STEM subjects have failed. Despite such efforts, women are still under-represented in the STEM sector.

The reason, this study suggests, is that girls tend to experience negative emotions about these subjects.

Are girls just too emotional?

Now, my initial reaction is to rail against the finding that ‘girls are just too emotional’.

But there does seem to be some grounds for the researchers’ conclusions.

The math performance was higher, and cases of anxiety were lower, in more developed countries, compared to lesser developed ones.

But this pattern was more prevalent in the boys.  It seems that parents in developed countries emphasised their sons’ mathematical development more than their daughters.

Now, this is not to say that it is all parents’ fault. The various policies designed to attract girls to these subjects have also failed.

I would argue that this study has missed out one key factor. It’s that all day, everyday ‘girls’ are being fed all kinds of messages (visual, aural) about what they should be. And what they should want to be. TV shows, movies, adverts, news reports and even girls’ daily interactions all contribute to the female concept of self.

Could it be that girls react negatively to maths and other STEM subjects because they don’t seem like a typical option for girls? I mean, when was the last time we saw a popularised female figure who was an astrophysicist? Or even a high school mathematics teacher?

The girlfriends on the popular TV show, The Big Bang Theory, or hyper-sexualised Marvel rocket scientists simply don’t cut it. Probably the teachers who would be instructing girls in these subjects would be male. Did the University of Missouri-Columbia study take that into account?

This study states “it is fair to say that nobody knows what will actually attract more girls into these subjects.”

Yes, we do know!  It’s that we must change the social-construct of what a ‘girl’ should be. Or better yet, the construct disappears altogether. It is possible that it is not the subjects or the girls that are the ‘problem’.

Alas, us humans exist in a fishbowl of a society where influences surround us every day on a conscious and subconscious level.

The girls' maths 'anxiety' might be reduced if it no longer seems weird for a girl to excel in STEM subjects. And if we see popularised female figures doing maths, science, technology and engineering.

That's not to say there have not been been any respectable female role models in the last 2 decades. However, whether it be Buffy or Michelle Obama, female mathematicians who can be seen as believable in their own right are still few and far between. To have these female characters a star in their own right and free from any male attachments is virtually unheard of.

So it may seem that the female ineptitude in STEM subjects may actually be a social-construct. It’s not the girls’ ‘fault’. It's not that they are too ‘emotional’ to take the subjects but rather are not encouraged to do so on a wider scale.

It is not a question of changing the subjects or the students but, rather, changing our societies as a whole.  Not a tall order at all, is it?

Can You Have a Maths Brain?  Dr Martha Burns explains