Can We Predict if a Baby or Preschool Child Will Struggle to Read? 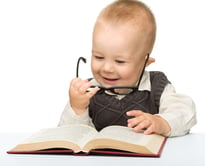 Imagine if we could test a newborn baby’s brain to screen for possible later reading difficulties when they go to school.

If this sounds fanciful to you, you are right. At the moment this is not possible, and it’s unlikely to be in the near future.

But USA neuroscientists are now working on tests to predict the ability of preschool children to learn to read, and this may one day lead to routine screening of newborns for later reading problems.

That’s the goal of Professor Nina Krause of Northwestern University. She has developed a 30 minute test to measure how the brains of children as young as three process speech in a noisy background.

The test, described in the journal PLOS Biology, predicted how well the 3 and 4 year-olds did on a language skills task and how they performed a year later on several standard pre-reading assessments. The children will be followed in the future by the researchers to assess how well they eventually read.

The scientists are looking for ways to tell, as young as possible, when children are at risk for later learning difficulties so they can get early interventions.

"If you know you have a 3-year-old at risk, you can as soon as possible begin to enrich their life in sound so that you don't lose those crucial early developmental years", said Dr Krause.

A child’s ability to connect sound to meaning is a key foundation for reading. Preschoolers who can match sounds to letters go on to read more easily.

Those that find it hard to recognise specific sounds - consonants (such B, D, V etc) – when there is background noise are more likely to have trouble with learning to read.

Hearing in background noise is an auditory processing skill.  If the child’s brain is slow to distinguish a "D" sound from a "B" sound, for example, then recognising words and piecing together sentences could be affected, too.

Dr Krause’s work has the potential to help the estimated 10% to 20% of children who have difficulty learning to read, at a much earlier age than we are able to now.  However, she cautions that further research is needed before we can be sure we are able to confidently predict later reading difficulties from pre-school auditory processing ability.

Auditory Processing Disorder - What Brains Do With What Ears Hear