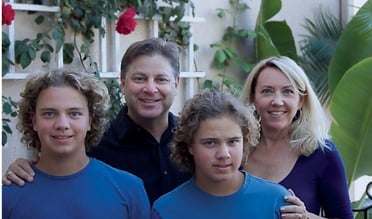 Like all parents, Marc and Tina were so excited when their twin boys were born.

They felt much different emotions when, two years later their identical boys, Jared and Jason, were diagnosed with autism.

The diagnosis started Marc and Tina on a journey to help their boys and led to them developing an interactive program to help Jared and Jason with their social and emotional skills. The program, The Social Express, was so successful that it is now being used by many children, with and without autism, to improve their ability to interact with others.

Marc & Tina's story was recently published in The Autism Parenting Magazine.  This is how Marc tells it:

Can you imagine the excitement?

In 2001, Jared and Jason Zimmerman, were born to my amazing wife Tina and me.  Our first thoughts were we would need two of everything, that our families were going to be completely surprised, and of course, this could get expensive!  Needless to say, no matter how much you plan for two babies, there are going to be some challenges, and some curveballs, that will come your way…

We just had no idea the information we would receive two years later.

In 2003, Tina and I were well on our way regarding parenting, play dates, bottles, diapers, etc.  It was the normal process of raising a family.  Sure, there were the sleepless nights, and the challenge of trying to get Jared and Jason to sleep and eat at the same times.  Everything we did was multiplied by two—and while we thoroughly loved it, costs were creeping up, and we realized that planning for the kids’ future needed to start now.

One of our closest friends suggested we contact a Hollywood Talent Agent to represent the kids for TV or Print advertising work.  This would be a great way to start putting some money away for college and other expenses as the kids got older.

You see, Jared and Jason are not only identical, but they have the “California Surfer” blonde hair with flowing locks, beautiful smiles, and just all around cuteness.  We could barely go anywhere without being stopped by people gushing over our kids—they were Rock Stars!  Figuring there was no harm in investigating this avenue, we went and met with a high profile casting agent.

The meeting with the casting agent was intense for Tina and me.  Would they like our kids?  Could the boys “pass the test?”  The answer to these questions came sooner rather than later, and some additional insight would change our lives forever.

The agent loved the boys, and would sign them to a contract tomorrow, but she was concerned that they had trouble communicating.  When she tried typical prompts that the kids would be met with in a professional setting, there was nothing, just a blank look on their faces—no pointing, no looking, no ability at all to follow directions. “I am sorry, but there is no way I could put your boys on a set,” she told us…

Truth be told, this wasn’t the first time someone had mentioned to us that our boys may have some delay in their development, but who wants to hear that?  Perhaps, because they were identical twins, this was somehow normal and they would “grow out of it.”

Even when our own pediatrician told us the boys were not developing at a normal rate, we really didn’t want to hear it; we told ourselves to just keep moving forward and everything would be fine.  But our meeting with the casting agent was our tipping point, and we realized that we needed to address the situation.

After understanding what autism was (we had no prior experience with this whatsoever), it quickly hit me that my twins were not going to be like Tina and me.  We are both highly social and have no problems talking to anyone; however, this wouldn’t be the case for our Jared and Jason.

It then became my mission to try and help the twins with social skills first and academics second.  After making several attempts to use the current tools and not seeing any change, I was beginning to accept that there may not be anything to help them.  Then one day, during a therapy session at our home, I saw the twins working on a computer doing some drills.  They were smiling and engaging like I had never seen before. Prior to this, it was all flash cards—nothing “high tech.”

That moment changed my life forever.  I thought if I could come up with a way to engage Jared and Jason by using the computer, focusing the content on social skills, perhaps they would, at a minimum, be engaged and hopefully generalize what they saw and apply it to everyday life.

After dropping Jared and Jason off at school, I had the idea of making a software program that “looks and feels” like an animated Pixar movie – something all kids love! Additionally, the program would have the ability for the kids to touch the screen and directly interact and engage with it.

All I had to do now was convince my wife Tina, because this would require going into our nest egg.  It didn’t take much convincing, after all; if it worked, it would not only benefit Jared and Jason, it could go on to help countless others. It was a no-brainer, and The Social Express was born.

Committed to this newfound goal, we brought together an advisory board of top therapeutic and educational professionals who were certified in helping kids with special needs.  Then, we sought out animators and other tech experts who would help bring this dream to life.

For preschoolers to high schoolers

The Social Express® targets core deficit areas that stand in the way of school, social interactions, and life success for children and young adults with social learning challenges. The software addresses these areas of need by providing a highly interactive and visual presentation, utilizing an additional component that allows for the generalization of skills outside of the teaching environment.

Most recently, The Social Express has been included in the latest version of the National Education Technology Plan 2016 – Future Ready Learning: Reimagining the Role of Technology in Education.  Updated every five years, the National Education Technology Plan (NETP) is the key educational technology policy document for the United States.  The Social Express is cited in the report’s chapter on “Engaging and Empowering Learning Through Technology” as an example of a digital solution to help build non-cognitive competencies.

What started as an idea to help our boys has now grown to help so many more and continues to grow and evolve. To make a difference is truly an awe-inspiring feeling for both Tina and me.

Can Comic Books Help People with Autism Make Sense of Their World?