Autism & Fast ForWord123: What a Difference a Few Months Make 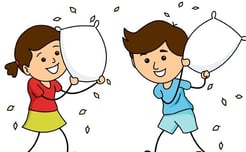 In the Rethinking Learning Blog a mother of a 9-year old autistic boy wrote how the Fast ForWord123 programs have improved his expressive language skills, listening skills, ability to follow directions, conversation skills, desire to interact with others, social skills and reading comprehension.

The mother, who calls herself by her blogger title, 'Mama Woz' says, "the progress he’s made in the 3.5 months since starting Fast ForWord has been truly exponential".

Here is her story, courtesy of the Rethinking Learning Blog:

Our family-of-four went to dinner recently at a fairly nice restaurant, cashing in on a gift certificate I’d been lovingly given for my birthday. Both of our children minded their manners, took turns talking, contributed to the conversation and even took turns sharing a delectable dessert.

After we got home, we asked our typically-developing 11-year old daughter to take charge of our 9-year old son with autism’s bedtime routine, and get him all snuggled in so my husband and I could enjoy some adult time on the patio.

She joyfully agreed. I think this is only the second time in their lifetimes she’s done this. It wasn’t until recently that we’d ever even considered asking her given our son’s challenges. But soon, we overheard our son independently getting ready for bed. Jammies, potty and teeth brushing. And then we heard the two of them giggling, conversating, and playing pirates for about another half-hour before they settled down and were out for the night.

Clearly, not all of our nights are this picture perfect but it wasn’t long ago when what I just described felt like an impossibility. Yes, Sulli had made some significant gains before we began the Fast ForWord program but he was still struggling significantly in many areas. And as my husband and I sat there, glowing a bit from the delightful evening we were experiencing, he turned to me and said, “That dang computer program has been one of the best things we’ve ever done for him.”

I love my husband’s perspective because he’s generally more objective than I tend to be. It’s easy for me to get in my head, consider the bazillion different things we have going on and over analyze. For my husband it’s simple. The only thing that’s changed in Sulli’s intervention plan in the last 3.5 months is the implementation of the Fast ForWord home-based program. He’s right.

It’s getting easier for me to put my finger on the changes we’ve witnessed the longer we’ve been using the program. All the nuances we noticed in the beginning have become more pronounced and I can say with certainty they aren’t a fluke.

Oddly, while I was expecting the most improvement in reading comprehension, that’s the area where I feel like he’s progressed the least. He’s certainly made some gains that we are pleased with but the big surprise is all of the other areas of improvement.

I’ve talked before about when you are an autism parent, there are a lot of fish to fry. So prioritizing is important. Case in point, while we know reading comprehension is extremely important, that gets trumped by his expressive language skills, listening skills, following directions skills, conversation skills, desire to interact with others and developing social skills.

Right now, as his mom, seeing him truly enjoy the social interactions of childhood and watch his language skills skyrocket, especially after spending so many years so isolated and unable to do many things independently is incredible. Yes, I’m concerned about him reading and comprehending on grade level too, but it falls a bit lower on our list of priorities.

The good news is, with Fast ForWord, we’ve gotten BOTH. But the developmental growth we’ve witnessed is what has us doing cartwheels.

I’ve been saying for years that until Sulli’s processing speed actually speeds up, he is going to continue to struggle significantly. If a person processes what they hear too slowly the ramifications are widespread. Slow processing speeds cause children to miss words in conversation and they can’t fill in the gaps. It can mean they miss subtler aspects of language.

Often times they are working so hard to understand the words, they miss the point. It makes it harder to understand multi-step directions or can make them feel lost when listening to stories with lots of events and characters, or lack confidence in navigating the speed and complexity of typical language with their peers.

I imagine it is a lot like being a tourist in a foreign country where a person only understand bits and pieces of language, coupled with also being ill-equipped to use the context clues of an interaction to figure things out.  How hard it must be to feel like you are in a continual state of feeling lost, out of place and unable to grasp the entirety of conversation.  It’s no wonder children on the spectrum often withdraw socially.

Fast ForWord says that by exercising processing skills through intensive, adaptive activity, actual physical changes occur in the brain. That’s neuroplasticity, folks! Sulli has been in therapy for what feels like his lifetime but the intensely repetitive, new neuron-connecting exercises that the five-days-a-week Fast ForWord program provides, simply can’t happen in once weekly therapy sessions.

If I couldn’t tell from my daily interaction with my son how far he’s come, I could certainly tell by sitting with him while he is completing his Fast ForWord games daily. Good golly, the difficulty has increased quite a bit! Sulli finds some games easier than others, but oh-man, even I have to pay close attention or I would answer some questions incorrectly. There’s one game where tones come in rapid succession and the kiddo is supposed to identify the order. I literally can’t do it! Meanwhile Sulli is zipping through.

Here’s what we’ve seen. Sulli is super engaged! He wants to engage in conversation so often we have to get onto him about interrupting! He might not always be on subject, and some of this speech is still repetitive but it is constant and fluid. His sentences are longer and the structure more intact.

His staple answer to most questions has traditionally been, “I don’t know.” Answering questions has always been so hard for him so he lacked the confidence to even try. Can you imagine having all that language and thoughts in your brain but feel incapable of getting it out? Now his answers are more complex and delivered with more ease.

He’s more and more excited about interacting with his peers and his sister. This past week was our first week of summer and both the kids were home. I was shocked at his willingness to engage in games that require turn taking and back and forth conversation.

He and his sister frequently ran off and figured out something to do together (at her direction, I’m sure) but this is the first summer this has ever happened!  Sister is enjoying the reciprocal interaction with her brother as much as we are witnessing it!

He’s doing more and more things that remind me of a typically developing kid! Chasing the cat around the house, sneaking treats when we aren’t looking, pretending he is different kinds of animals, or ghosts or monsters. He’s also more willing to try new things and have unexpected changes to his schedule.

When he does begin to get worked up about something, he’s much easier to calm down and reason with. He’s more receptive to answers to questions that are open ended vs. well defined. For example, before he would need to know exactly what time we were doing something and now we can simply respond “in a few hours” or “when we get around to it.”

I’ve been able to have conversations with him about being responsible, being kind, staying safe, being appropriate, using manners, etc. and gone is the blank stare I’ve historically seen. It’s been replaced with him communicating some understanding of the concepts and putting them to use in his daily life.

Yes, we still have lots of work to do.

But these are blockbuster changes for our sweet boy.   It’s true we’ve been laying the foundation for years with many other interventions but the progress he’s made in the 3.5 months since starting Fast ForWord has been truly exponential. It is profoundly heartwarming to see your child making leaps and bounds, especially when he’s had to fight for every developmental gain for so very long.

We are currently about two-thirds of the way through Foundations II and are very excited to continue. After researching neuroplasticity for quite some time, I’m very pleased that Fast ForWord has provided us such clear insight into how exercises for the brain can actually address the root cause of difficulty and how the brain can rewire itself to overcome those challenges.

And after all these years, we are looking forward to more quiet evenings on the patio while our kids play together.