Dr Martha Burns is a neuroscientist, author of over 100 journal articles and multiple books, and a leading expert on how children learn. She explained:

"So what we were talking earlier about listening skills, that's the term teachers use. Listening skills. Can the child sit in the classroom and pay attention to me?

Because 80% of education is the teacher talking and the student listening, no matter where you are. And attention matures just like other aspects of cognition mature.

There is a part of the brain that's very important for being able to attend to one thing and ignore other stuff. So if you think about a student in the classroom who has poor listening skills, what is that student doing? That student is looking or listening or distracted by what's going on outside in the playground. 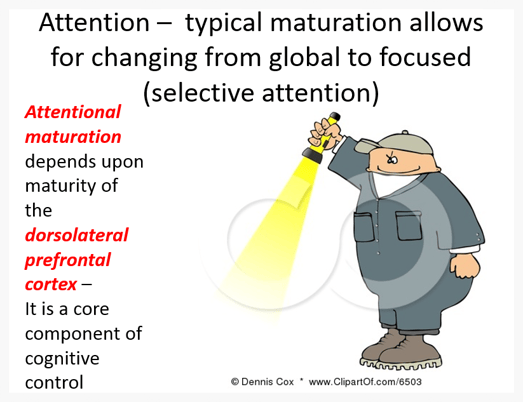 That student is fiddling around with stuff on the floor. That student might be watching the kid next to them. He might be pulling the braid on the little girl in front of them. He's highly distracted. He can't selectively attend to the teacher. To selectively attend to the teacher, there's a very specific part of the brain you need. It's part of the frontal lobe.

What we have now is research that has been around since 2008 that very few people ever talk about, that is perfectly controlled, totally independent. It is the study at Dr Helen's Neville's lab.

It looked at listening skills. What they had the students do was watch a slide show of a story and they are getting two stories coming in. One in one ear, one in the other. They are told to pay attention to this story and ignore that story.

That's a really hard thing for a seven year old to do. While they are listening, the researchers are measuring their distractibility to little sounds that shouldn't be there. Sometimes it's a word and sometimes it's just a sound. It's a complicated study, the kids have electrodes and they are measuring is the child distracted.

Those who had no Fast ForWord showed no change in language even though they were sitting in a classroom all day learning. If you look at the amount of improvement, the most improvement was made with the most impaired children. The more impaired someone is in language, the better their improvement. The more significantly they improve.

Then they looked at attention, the ability to ignore the distractor. And what they found is language impaired children were very impaired in their listening skills before Fast ForWord and showed incredible gains in listening skills.

Now what do these students look like in your classroom? The students with attention problems versus memory problems - we are going to talk about memory problems in a minute - are poor listeners. They tune out. They are easily distracted. They look around to see what everyone else is doing all the time, because they can't attend to the teacher.

So they are terrible at following instruction. They fidget, they are impulsive, they are intrusive, they yell out answers, they have a lack of self-control. Often they are diagnosed with ADHD and they are always saying, 'What? Huh? What did you say?'

'Billy, go upstairs get your coat, get your homework, don't forget to close your window because it looks like it's going to rain and let’s go, chap, chap.' 'Huh? What?' That's the child who has attention problems".