A round peg for a round hole: the power of individualised learning solutions 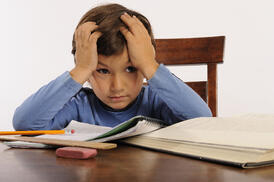 I recently came across the story of a primary school aged child who was experiencing a mental road block with subtraction. The child was otherwise reasonably comfortable with maths, but complained that what the teacher said about subtraction made no sense and that, as a result, they pretty much chatted with their friends instead of paying further attention. This may have appeared to the teacher as a lack of interest and inability to concentrate. To the parents though, knowing their child as they do, the coded message was different. It meant, "I want to understand this, and I am frustrated that I can't, so I need to make light of the fact that I tuned out of the lesson".

A dilemma for parent and child

One of the parents, a maths teacher themselves, enthusiastically stepped up to fill the breach. The problem was the child wasn't having a bar of it. On the contrary. What the parent said "made no sense" either and led to a spiral of further frustration and emotional upheaval. Disappointed and despondent, the parent retreated to puzzle over what had just happened. The child pulled back to a comfortable distance and, to all intents and purposes, signalled that the maths tutorial was over.

The other parent, also upset by now, began mentally casting around for other possible solutions. Any solution! Thinking that they couldn't be the first parents to find themselves in this predicament, they reached for the internet. Sure enough, within a minute or so, a quick app search had revealed a number of options, including one that allowed the child to draw and doodle on the screen. A quick download later, the parent sidled up to the child and remarked - as offhandedly as possible - that this looked like it might be fun. The pull of the screen was irresistible and the child was soon fiddling around with numbers. To both parents' surprise, it was quickly apparent that the child had in fact been listening and, not only that, was now able to apply the basic principles involved in the subtraction process. Peace was restored and everyone was happier.

Making sense of it all

How could this be? Why had the child been feigning a continued lack of understanding, preferring to get upset instead? Or had the child itself not realised that the penny had dropped until they were provided with an alternative outlet for applying their knowledge. Indeed, is the answer to these questions as important as the fact that this one small, but potentially significant barrier to the child's learning had been overcome?

Perhaps the really important message is that the keys to unlocking learning road blocks come in many shapes and forms, depending on the individual needs and preferences of the learner. It's not possible to be sure the at an app will always come to the rescue. Maybe the right app hasn't yet been written for a particular child in a particular situation, or maybe a non-computer based solution might sometimes be more effective. Perhaps a plasticine model or a charade or an interpretative dance might do the trick.

The important thing is not to be constrained by traditional methods and to trust that your understanding of your own child can help you to tap into other ways of doing things.