5 Risks - Is Tech Use Really Bad for Learning Capacity & Behaviour? 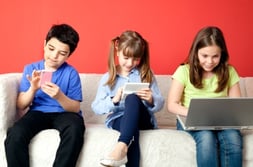 What's your opinion about young children using computer technology?  Do you think too much use is a problem? How much is too much? Is it a problem for their intellectual, social, emotional, or physical development? Does it reduce their learning capacity and contribute to behaviour problems?

If you have, like me, been reading some of the commentary about this issue, it would be easy to believe that there is definitely a problem. Or you might have an uneasy feeling that in some ways, for some children it could be.

Two UK  scientists from University College London and the University of Oxford who work in mental health, developmental neuropsychology, and the psychological impact of digital technology, claim that most of the negative commentary has not been based on scientific evidence.

Writing in the British Medical Journal (BMJ), they take issue with the high profile Professor Susan Greenfield who is well known for her views that technology use can be damaging.  They say that there is no current scientific evidence to back Professor Greenfield's  assertion that intense use of the Internet and computer games can harm the adolescent brain.

Here are 5 ways technology may be harmful, according to Susan Greenfield, and the arguments against her views:

The scientific evidence, according to the BMJ article:  Adolescents' use of social networking sites has been found to enhance existing friendships and the quality of relationships, although some individuals benefit more than others.

Evidence from Facebook suggests that people generally portray their identity accurately, so claims that social media can have a negative impact on children's personal identity are not valid.

Professor Greenfield: Online interaction might be a "trigger" for autism or "autistic-like traits."

The scientific evidence, according to the BMJ article:  There is no basis in scientific evidence. This is is entirely implausible in light of what we know of autism as a neurodevelopmental condition that can be first diagnosed in the preschool years.

"Professor Greenfield's claims are misleading to the public, unhelpful to parents, and potentially stigmatising to people with autism," the two scientists say.

Professor Greenfield: Intense use of computer games could lead to a shorter attention span

The scientific evidence, according to the BMJ article:  Studies on video gaming give a much more nuanced conclusion.

Professor Greenfield: Use of computer games could cause impulsiveness and aggression.

The scientific evidence, according to the BMJ article:  Evidence from studies on video gaming is not conclusive.

Professor Greenfield: Reliance on search engines and surfing the internet could result in superficial mental processing at the expense of deep knowledge and understanding.

The scientific evidence, according to the BMJ article:  This effect applies to many situations and is not restricted to the use of technology.

The UK scientists conclude "there is currently no evidence from neuroscience studies that typical internet use harms the adolescent brain, and they say that Professor Greenfield's opinions "are not based on a fair scientific appraisal of the evidence, often confuse correlation for causation, give undue weight to anecdote and poor quality studies, and are misleading to parents and the public at large."

The scientists acknowledge that valid concerns exist about digital technology, including issues with online safety.  But they say that the technology itself is not causing adverse changes in children's abilities and behaviours.  These changes are more likely being caused because children do less physical activity, and spend less time on school work when they use technology a lot.

"We need to recognise that use of the internet and digital technology has cognitive and social benefits and to balance these against any risks," they write.

Was this blog interesting? If so, let others know about it by sharing on social media, or sending the link to a friend or colleague who may find it interesting too.

Not so interesting? Let me know how I can improve by leaving a comment below.

Is a lot of screen time a problem for kids if they are using educational computer programs?

Tech in the Classroom. Does it Enhance Performance?

Is screen time bad for the creativity & learning capacity of our kids?